A Luxury Getaway in Thailand.

Until recently Bang Saray was a sleepy fishing village where the only activity was the coming and going of the small wooden fishing craft as they depart each day to make their catch.

Recently, due to the superb location it has been “slightly” developed by one or two high end villa projects. However, it still maintains its “olde worlde charm”. The gentle sloping beach and the calm turquoise waters are rarely busy and offer an excellent opportunity for relaxing and eating local barbecue and seafood dishes.

Only a couple of hundred metres in from the beach road stands the impressive Bang Saray Temple (Wat) with its tall roofs and highly decorated spires. If you are an early riser it is possible to see the monks on their daily rounds, collecting food and performing ritual blessings to the people.

Bang Saray (sometimes spelled Sere) is a small but growing village built around its fishing pier and safe harbour. While naturally the main population is Thai the remainder is made up of mostly European nationalities including Norwegian, Dutch, British, Irish, French, Italian and some Australians. This is reflected by most nationalities occupying a bar or restaurant in the village.

All in all it is a very laid back community consisting of fishermen going out to sea in the late evening as the sun goes down, and expats lazing on the beach if not golfing or indulging in watersports can be seen breezing along on that long sought after motorbike going nowhere special. While daytime is quite hot if not shaded under the many palms, the sun goes down about 18.30hrs. The locals are extremely friendly and operate their food, fruit and fish stalls on the kerbside or local market area which is normally held in the Temple grounds.

There are two Temples (Wats) in the village and as all over Thailand Temples are constructed soley from local donations the splendour and size of the Bang Saray Temples display alot of wealth in this particular area. Bang Saray is only 10 kilometers from Sattahip which is the largest Naval base in Thailand. The Navy on a weekly basis send about 100 recruits to the Village to carry out cleaning projects in the area such as Klongs (waterways) and the local beaches.

Thus the entire beach areas are spotless and the food vendors seen daily on the beach follow the example set by the Navy. During my time here I have met the only two policemen assigned to the area. Their busiest time each year is when they go around to sell tickets for the local football club or scout hall. 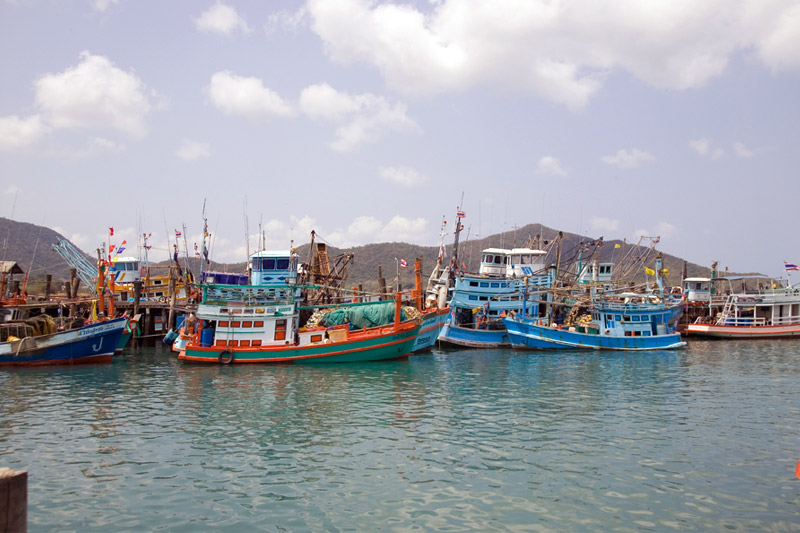